One of the most common questions I hear from LGBTQ parents is, “Are there any children’s films or shows that include LGBTQ people?” Although same-sex parents and our children have been depicted sporadically on television for decades (starting with ABC’s 1972 movie “That Certain Summer“), LGBTQ-inclusive shows for children (and across the full spectrum) have been a longer time coming.

The idea of LGBTQ people in children’s shows, however, as in children’s books, has made some people uncomfortable. Perhaps they fear that showing same-sex couples will necessitate talking about sex. (It won’t, any more than showing a different-sex couple will; there’s much more to love and relationships than that.) They might worry that LGBTQ characters will spark questions from their kids that they as parents won’t be able to answer. (There are websites to help with that, as well as educational videos and books for both kids and adults.)

But the fear has lingered. When a 2005 episode of PBS Kids’ “Postcards from Buster“ showed a two-mom family, George W. Bush’s secretary of education, Margaret Spellings, denounced it and asked the producers to return all federal funding. Producer Jeanne Jordan told the New York Times that the controversy made it difficult to find funds for a second season.

It was nearly a decade before any major network tried again, and they did so cautiously. The Cartoon Network’s “Adventure Time” characters Marceline the Vampire Queen and Princess Bubblegum always gave off a queer vibe—but it took Marceline’s voice actor answering a fan question at a book signing in 2014 to confirm it. A later tweet from her brought that into question, but the relationship between the two characters can easily be read as queer.

Nickelodeon’s “Legend of Korra“ showed the female protagonist having a romantic relationship with a man at one point in the series, but in the last scene of the last episode (2014), she and her female best friend gaze into each others’ eyes in a moment that the show’s creators later confirmed was meant to indicate their newfound romance. Similarly, Disney XD’s “Gravity Falls“ revealed in the last episode (2016) that characters Sheriff Blubs and Deputy Durland were a couple. And Disney Channel’s “Good Luck Charlie” guest-starred a two-mom family three weeks before its last episode in 2014.

Things weren’t too different on the big screen. In 2012, “ParaNorman” gave us the first gay character in an animated film—but again, we don’t learn he’s gay until right before the end. The point may have been that his gayness didn’t matter as much as the rest of his character, and that’s valid—but it felt a bit like it was played for the surprise factor.

Disney took the same approach to its 2014 live-action feature film “Beauty and the Beast,” which  director Bill Condon said would have an “exclusively gay moment.” It’s a blink-and-you’ll-miss-it moment, though, when villain LeFou dances with a man for a couple of seconds near the end of the film.

The most queer-inclusive family film to date has been a lesser-known one from Canada, “Breakfast with Scot,” in which an unsuspecting, child-free gay couple finds their lives transformed when circumstances leave them as guardians to a relative’s stepson. When he turns out to be more flamboyant than either man, one of the men, a former pro hockey player, must reexamine his closeted life. The film received the official sanction of the National Hockey League and the Toronto Maple Leafs, the first time a professional sports league allowed an LGBTQ-themed film to use its uniforms and logos. It has a PG-13 rating, though, mostly for language and a few drug references (the boy’s birth mother was an addict), so parents may wish to watch it first.

More recently, however, regular queer characters have started to appear in a few animated children’s television shows for older elementary and tween viewers. The Cartoon Network’s “Steven Universe“ has several ongoing female characters with romantic feelings for each other. Protagonist Steven can also “fuse” with his friend Connie to become a being who uses gender-neutral pronouns. He also once wore his friend Sadie’s clothes for a performance, and no one blinked at his wearing a girl’s clothes. The best friend of the protagonist in Nickelodeon’s “The Loud House“ has two dads, and the best friend of the protagonist in the Cartoon Network’s “Clarence“ has two moms (voiced by queer actors Lea DeLaria and Tig Notaro). Amazon’s “Danger and Eggs” includes characters from across the spectrum, including a trans character voiced by real-life trans teen Jazz Jennings. One episode was even set at a Pride celebration.

Notably, a couple of shows for the very youngest children have also made very recent moves towards LGBTQ inclusion. Disney Junior show “Doc McStuffins“ last fall featured its first two-mom family, with the moms voiced by queer actors Wanda Sykes and Portia de Rossi. The moms are named after Edie Windsor and Thea Spyer, the couple at the heart of the 2013 U.S. Supreme Court marriage equality decision; their kids are named after queer icons Gertrude Stein and Brandon Teena–a little extra resonance from creator and Executive Producer Chris McGee, a lesbian mom herself. The episode itself has no “queer” theme, though, and that’s fine; it’s all about the importance of having a family emergency plan, from which any family can benefit.

And the venerable “Sesame Street“ has started including same-sex parents in a few episodes about different types of families. The show is a surprising latecomer to LGBTQ representation, given its long history of other types of inclusion, including major characters of color, characters with disabilities, and one storyline about a single woman adopting a child–but its recent moves carry weight, since it is the lauded elder of preschool programming.

For tweens, the Disney Channel’s “Andi Mack” recently introduced that network’s first ongoing LGBTQ character, when the male best friend of the protagonist tells her he has a crush on the same boy she does, the beginning of a multi-episode coming-out arc.

And for older tweens and teens, Disney-owned Freeform’s “The Fosters,” which ends its run this June, has for five years depicted the lives of two moms and their mix of biological, adopted, and foster teens in San Diego. It has also included positive portrayals of a gay middle schooler and two very different young transgender men. Over at Disney’s ABC, “Modern Family” gives us an ensemble comedy about an extended family including two gay dads and their daughter, but this is also best for older youth.

While inclusive children’s shows from major networks and studios, especially for younger ages, have still been relatively few, independent efforts have tried to fill in the gaps. Two sets of queer moms separately launched kids’ shows on DVD in 2007, but could not sustain them. They were followed by a few other short-lived efforts.

On the more purely entertaining (though still often educational) side, Olly Pike also has a number of “Pop ‘n’ Olly“ videos with stories, songs, and kids’ activities. Trans visual artist Mor Erlich has launched “Sez Me,” a gender-expansive and queer-positive series starring drag queen Charmin Ultra (Jeff Marras), along with an animated news anchor and a variety of child guest stars. And Gender Spectrum, an organization that works to educate about gender identity and inclusion, has a series of videos in which authors of relevant picture books read them aloud.

There are also a number of other LGBTQ-inclusive YouTube stories and songs for children that aren’t necessarily part of a series, but are well worth watching. Also, more and more authors of inclusive children’s print books are doing video “book trailers”–not always of the whole book, but enough to get you and your kids excited about seeking them out (and a way to see more queer people on your screens).

Children’s media to date has only shown a small (and sometimes too brief) glimpse of LGBTQ lives. We need more that include us where our queerness is not the point of the story; at the same time, we need more that help children understand what it means to be lesbian, gay, bisexual, transgender, queer, or any of the other identities under the arc of the rainbow. We need to make sure these stories show the same range of genders, races, religions, cultures, socioeconomic classes, abilities, and family structures that queer people have in real life. Both children with LGBTQ parents and LGBTQ children themselves will gain confidence and self-worth from seeing themselves reflected; their peers will learn more about their classmates and be better able to understand and interact productively with the world around them. 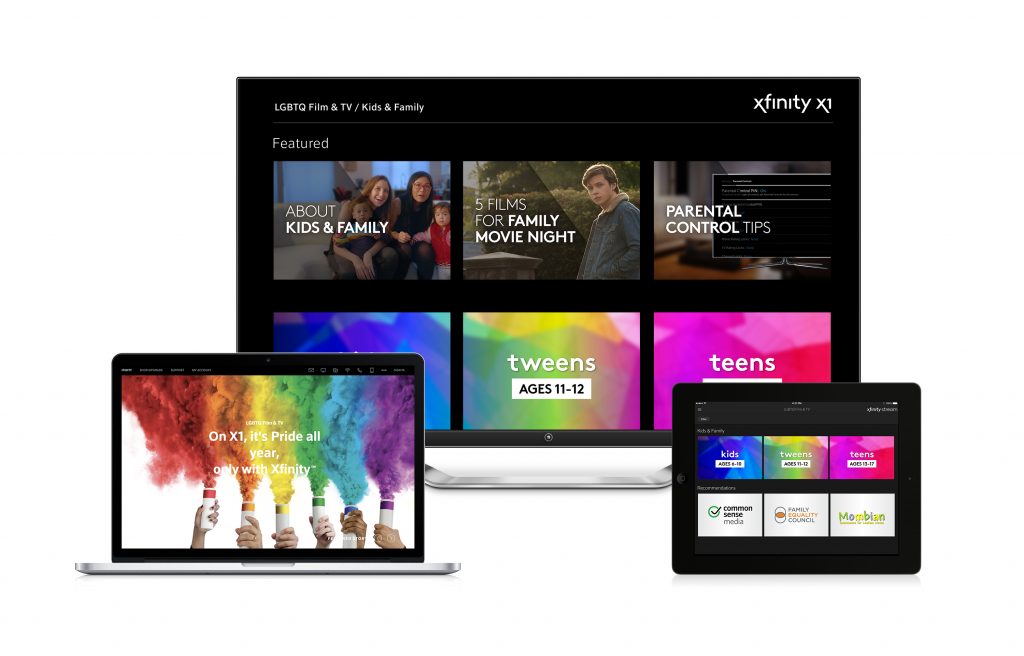 I’m thrilled that Xfinity is choosing to showcase so much of the LGBTQ-inclusive children’s media that exists. While mainstream efforts may still be few, and independent efforts sometimes rough around the edges, representation can have a hugely positive impact on children’s lives. Making it easier for families to find this content is invaluable.

You can check out Mombian’s collection within LGBTQ Film & TV’s Kids & Family destination on Xfinity. Simply say “LGBTQ” or “Pride” into your X1 Voice Remote. You can also text search with the term “LGBTQ” on your set top box or in the Stream App to browse the collection.

The opinions expressed are solely those of the author and do not necessarily reflect the views of Comcast.